Cover Reveal for LET ME KNOW

I’m excited to participate in today’s cover reveal for Stina Lindenblatt’s newest novel, LET ME KNOW! This is the gorgeous sequel to TELL ME WHEN. 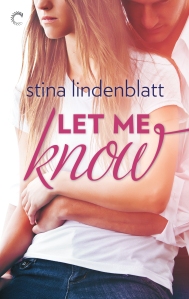 Add Let Me Know on Goodreads!!

About LET ME KNOW: This shouldn’t be happening again…Amber Scott thought her screaming nightmares would end now that her stalker is locked up and awaiting trial. But they return when her slam-dunk case starts to fall apart. Explicit letters she allegedly wrote surface, suggesting she was the mastermind behind her assault, a willing victim.Amber only feels safe in the arms of her boyfriend Marcus, the one person she can lean on. Until damning evidence from Marcus’s past collides with the case and the media circus drags them both down. To protect Amber’s reputation, Marcus has only one option: end their relationship. He won’t risk further damage to her case, even if it means breaking her heart.Amber has to find the strength to step into the spotlight and bring awareness to victims’ rights before she’s convicted in the court of public opinion. And she’s really not sure what’s worse—that her kidnapper could walk free, or that the seemingly endless attention and speculation will drive Marcus away permanently…

See how it all began for Amber and Marcus in Tell Me When.

About Tell Me When:

She shouldn’t be waking up her college roommate with screaming nightmares. She shouldn’t be flashing back, reliving the three weeks of hell she barely survived last year. And she definitely shouldn’t be spending time with sexy player Marcus Reid.

But engineering student Marcus is the only one keeping Amber from failing her math course, so she grudgingly lets him into her life. She never expects the king of hookups will share his painful past. Or that she’ll tell him her secrets in return, opening up and trusting him in a way she thought she’d never be able to again.

Tell Me When Goodread | Amazon | Barnes and Noble

Born in England, Stina loves to travel, and has lived in England, the US, Canada, and Finland. She spent a semester in graduate school living in central Finland, and a summer during her undergrad degree working in Helsinki. She has a Master’s of Science degree in exercise physiology and has worked with elite athletes. In her free time, Stina is a photographer, mother of three adorable kids, and devoted wife. She currently lives in Calgary, Canada.

Exclusive Excerpt from LET ME KNOW:

When I was younger, and believed in Santa, I would wake up at four every Christmas morning. I would then sneak into Michael’s room, and we would tiptoe downstairs to check out the presents Santa had left while we slept. I never had to wake my brother. He was always waiting for me.

Like the little girl I used to be, I wake to find my alarm clock glowing 4:00 a.m. While I’m no longer the girl with the brother eagerly waiting for her, I’m still the girl who sneaks downstairs to peek at her gifts.

And in this case, Marcus.

We haven’t had a chance to be intimate since he arrived less than forty-eight hours ago, beyond small, chaste kisses or hugs. After almost losing him, I’m happy we can have even those. But they haven’t been enough to stop my nightmares.

The only sound greeting me as I creep downstairs is the soft thud of my bare feet against carpeted steps, and the slight rustle of my pink satin robe. Underneath is one of my gifts to Marcus: matching pink satin panties and bra.

The soles of my feet touch the cold tile floor and I pause. Once I’m positive Mom’s mom senses haven’t kicked in, and she’s realized what I’m up to, I tiptoe toward the guest room and inch the door open. The room is dark, other than the faint glow from the Christmas lights next door.

As my eyes adjust to the darkness, I spot Marcus sleeping. I stand in the doorway, wondering how I got so lucky. If I hadn’t been failing my math class last term, I might never have given him a chance. A chance to prove he’s more than the sexed-up guy everyone assumes he is. While I might not be thrilled that so many girls on campus are intimately familiar with his body, a warmth floods through me at the thought that he’s mine.

“Are you planning to stand there staring at me,” Marcus murmurs, “or did you have something else in mind?” His tone is teasing and edged with a desire to do things to my body. Things that will leave me beyond satisfied. My breath hitches and I struggle not to melt away.

Now that you’ve been sufficiently teased, preorder LET ME KNOW right now!! Don’t miss out on this beautiful sequel! And if you haven’t read TELL ME WHEN, purchase it today!

TELL ME WHEN: Tell Me When Goodread | Amazon | Barnes and Noble

Did you love Kelsey and Hunt’s steamy romance in FINDING IT? Well, you are not going to want to miss out on Jackson’s story!

Jackson Hunt gets his turn in this Finding It prequel novella …

Jackson Hunt hasn’t been out of the military for long, but he needs to get a job and find a sense of normalcy if he is going to keep his demons at bay. The job that falls into his lap, though, is anything but normal.

Becoming bodyguard (and babysitter) to spoiled rich girl Kelsey Summers isn’t exactly what he had in mind, but it’s a chance to travel, to get away. The catch: Kelsey’s father doesn’t want her to know she’s being followed.

She’s vibrant and infuriating, exciting and reckless, mysterious and familiar. When Jackson sees her falling into the same patterns he suffered years ago, he decides it’s time to stop watching and help her instead. But getting to know Kelsey is more difficult than he thought, especially because the more he knows her, the more he wants her.

And what’s a release day party without a contest?

How would you like to win a $100 American Airlines Gift Card and one signed copy of  FINDING IT? One lucky winner will receive both. Just click on the Rafflecopter Giveaway link below to be entered to win these fabulous prizes!

A Rafflecopter Giveaway (This is an international giveaway)

Find SEEKING HER at the retailers below:

I was going to have to find some way to cope with this. If not, I was better off calling Mr. Summers and suggesting he find someone else to take over his daughter-watch.

I felt a pang of something at that thought. It was a general kind of discomfort, and I wasn’t sure whether it was the thought of returning home or something else that made that thought so unappealing.

After the cooling walk earlier, and now standing under the cool, calming rush of water, it was easier to think that I could control myself, but I knew better. It always seemed easier in my head than it really was.

I wiped the water from my eyes, and tried to think of some other way to deal. There was always the hope that Kelsey would get bored. That she would mellow out. If she only partied a couple nights a week, I should be able to resist. But that seemed unlikely.

All that restless energy; the way she’d soaked up the attention from the people around her. I couldn’t see her giving that up. And it was working for her. She was still in the phase where partying made her feel good. That was the one thing that helped me stay clean. The few times I’d slipped up since I started the program had left me miserable and angry, and even more frustrated than when I started. I’d found new ways to chase the high. And maybe that wasn’t any healthier, not when one way involved being in the midst of flying bullets.

It wasn’t the same kind of rush, but it did the trick. I pictured Kelsey again, laughing with her head thrown back, her shirt falling off her shoulder and displaying the gentle curve of her neck. It reminded me of the way she’d tossed her head back that first day out in the woods.

The memory of that caused a different kind of rush in me, and I groaned, pressing my forehead into the tile. Before I could help myself, I pictured her long legs straddling that guy in the gardens. The bright green material of her bra, and the way it conformed to her perfect chest. She leaned back, her fingertips trailing from the bark of the tree to his shoulders.

In an instant, the memory shifted into fantasy, and those were my shoulders she clung to, not his.
That was my undoing. There was only so much resisting I could do in one night.

Cora Carmack is a twenty-something writer who likes to write about twenty-something characters. She’s done a multitude of things in her life– boring jobs (like working retail), Fun jobs (like working in a theatre), stressful jobs (like teaching), and dream jobs (like writing). She enjoys placing her characters in the most awkward situations possible, and then trying to help them get a boyfriend out of it. Awkward people need love, too. Her first book, LOSING IT, was a New York Times and USA Today bestseller.